Nairobi - resting up for the safari

I had an uneventful flight from London to Nairobi yesterday.  We landed around 9:10pm at Jama Kenyatta International Airport.  They have set up some temporary buildings due to the International arrivals/departures terminal being destroyed by fire last month.  Although they warned on the plane that there would be delays due to the disruption, I actually got through the airport very quickly.  Had about a two-minute wait to purchase my visa.  What took the time was the coach ride from the plane to the temporary terminal.
I was met by someone from SITA tours who stayed with me until the driver arrived.  The drive to the Safari Park Hotel took about half an hour.  And along the way I decided the drivers were crazy.  I saw three traffic accidents and we had at least that many near misses ourselves.  Yikes!

I am really glad that I decided to pay the extra money to be met at the airport and taken to the hotel.  My original idea was to save money and find my own way from the airport to downtown and stay at a less expensive hotel there.  But it would have taken me a long time and much stress to get where I needed to go.  Here my biggest concern was finding the greeter who had a sign with my name on it.
The Safari Park Hotel is lovely – with lots of trees and flowers.  It is advertised as the premiere place for conferences in Nairobi.  It has five restaurants, a small shopping village, a couple of swimming pools and several hundred rooms.

When I checked in, I asked about whether or not they were able to arrange a tour for me to go to the baby elephant sanctuary and Nairobi National Park.  They could arrange to hire a taxi driver who would drive me around for the day.  The cost was going to be a lot more than I had imagined - $60 entrance fee to Nairobi National Park (one of the more expensive parks) plus the driver’s fee of approximately $140.  I told them I’d sleep on it.
Got to bed shortly after midnight and set my alarm for 6:30am (4:30am London time).  Kept resetting it for every half hour later until 8am when I decided that daytrip wasn’t going to happen today.  Besides the expense, it made sense for me to rest up and have a leisurely day around the complex instead. 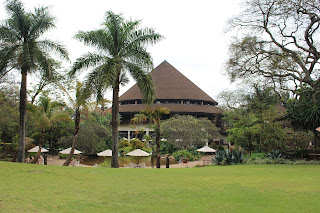 I spent the next few hours bird watching. 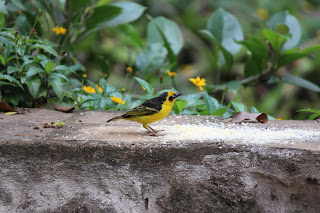 Can’t say I’ve ever really done it before as it always seemed a boring thing to do.  Having said that, it gave me a chance to practice using the manual focus on my camera.  I was finding the auto focus didn’t always focus on the bird.  Unfortunately, birds don’t stay still for long so by the time I had the focus correct they were ready to take flight.

Here’s a selection of the better bird photos.  There’s three of one with a longer beak – I think he’s the Eurasian bee eater. 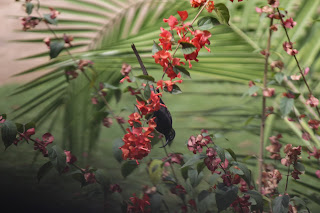 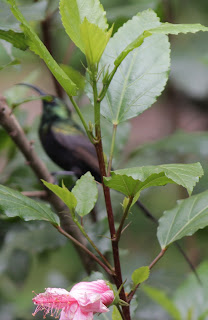 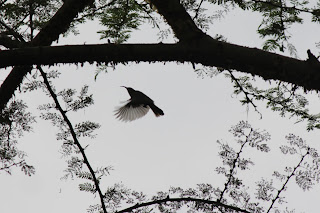 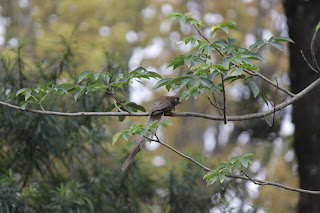 I also got a few pretty flowers.  The smell of the grounds reminds of the tropical gardens and tropical house at the Winnipeg zoo.  There were some very aromatic flowering shrubs and trees. 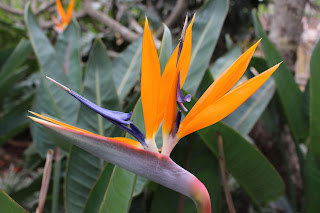 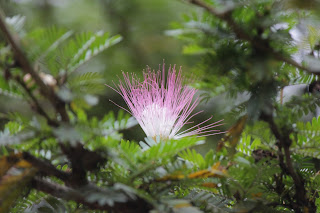 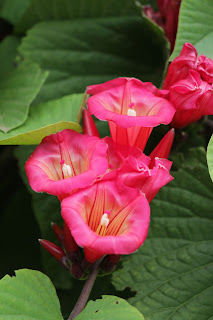 The hibiscus flowers I took from my balcony.  I’m used to hibiscus plants or shrubs – but this is from a huge tree. 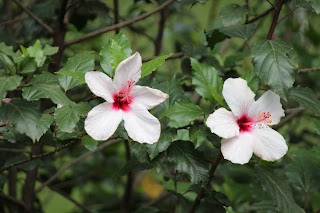 While I watching for birds on my balcony I thought I saw a hummingbird – it was about the same size and hovered.  I took a few photos with my furthest zoom and now that I look at it closer, I can see it wasn’t a bird, but a pretty big insect! 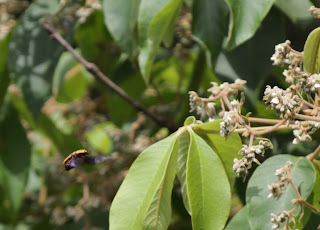 I’m glad he didn’t find his way into my room.  I’ve been pleasantly surprised with the absence of mosquitos.  I saw one in my room last night.  But, I still used the mosquito nets anyway. 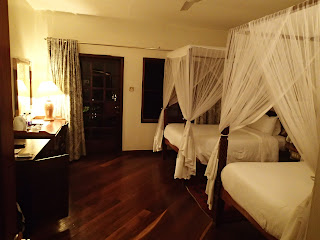 My bed was very, very hard but I still managed to sleep.  I had the window open as I slept and had all the insects and birds lull me to sleep.  Very nice!
This orange flowering plant reminds me of the ginger plants in Hawaii.  Not sure if that’s what it is, though. 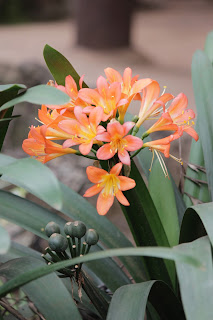 Towards the end of my walk, I came across a small lizard – maybe five inches from head to tail.  He was quite shy at first.  He’d duck behind the rocks and then after about 30 seconds would poke his head over the side. 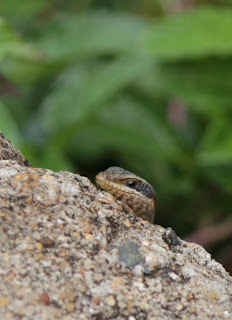 If I was still he’d get back on top of the walkway rock ledge.  If I moved he’d duck away again.  I was able to get some great pictures of him, in focus. 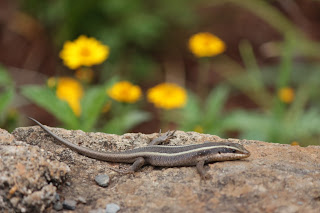 Had a three hour nap this afternoon.  And soon I’ll head over to the Italian restaurant for an oven-baked pizza.  I decided to skip the big barbeque and dinner show.  The pizza has been calling my name and should be a lot cheaper and tastier than the dinner and show.  As I walked by the barbeque restaurant I could smell the mutton cooking.  Think I’ll pass.
My safari officially starts tomorrow at 7am so I’ll try to get to bed early.


Not sure when I’ll next post.  I learned the internet is very expensive.  In London I paid 3 pounds sterling for two hours – a bargain.  At the business centre on the grounds I could use their computer for 30 minutes for about $12.  Or I can get the internet in my room for 24 hours for $25.  So that’s what I’m doing today.  Not sure what it will be like when I’m in the more remote areas of Kenya.
Posted by Linda McClung at 9:46 AM

We understand if you choose not to spend money on the Internet connection, Linda. But if you're determined to blog as strenuously as Beth would, write and edit the blog in a text editor first; and edit the photos in the computer before you go online. Then you can spend a few minutes copying and pasting the text and inserting finished photos.

Or you could make notes and take photos, then post when you get back to "civilization." We're patient an will understand technical difficulties like 'no Interwebs." The most important thing is to enjoy your trip!