I had a successful trip to Mombassa on Friday.  Dennis, my taxi driver, took me to Mombassa.  He told me to keep all my belongings in the back until we got to our destination as the suburb we were going through was known for thieves reaching into the window and snatching anything on your lap.  Oh goodie...

We parked in the secure grounds of the Castle Royal Hotel - which I think is from the early 1900s.  It looks very colonial in nature. 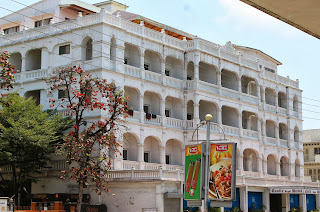 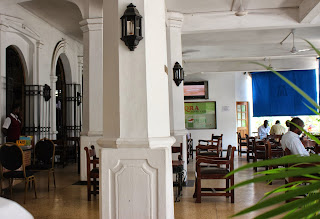 From the hotel, we met Atwar, my official guide for the city.  He was very friendly and informative.  He was telling me about natural remedies - like taking the leaves from the Nim tree and making a tea with it to cure malaria.  The Nim tree has quinine in it.

Dennis had told him I wanted to get some spices and some souveniers as well as see the old town.  So off Atwar and I went to explore.  I was shown through a Hindu temple.  And then we went to the fish market.  There were only two fish left, but the market had a great view of the bay which we didn't have to pay for.  Next door, we would have had to pay. 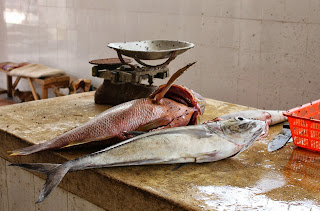 We went through the streets leading to the markets.  Individuals would set up shop on the sides of the alley but there were also proper shops and the market buildings.  Atwar took me to a proper spice shop.  The owner there showed me all his spices, and let me take a sniff of each one, explaining the different types of curries, peppers, etc.  It was very interesting and no-pressure.  I bought lots of spices to take home. This is what pilau looks like ground and unground.﻿ 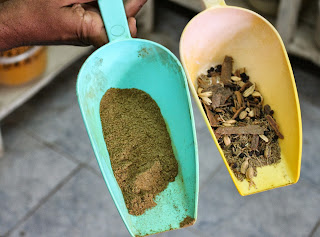 The vegetable markets were next - and there were lots of sellers, selling various fruit.  There were Kenyan bananas but also red bananas from Zanzibar (more expensive of course).  I also learned there were three types of passion fruit.  I've had the fruit a few times since I've been here and have also had passion fruit juice for breakfast most mornings. 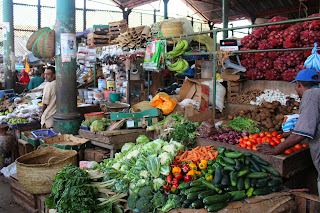 Beyond the vegetable markets was the meat market.  Lots of sellers here, too.  Atwar showed me the camel stalls.  Very tasty, he said. 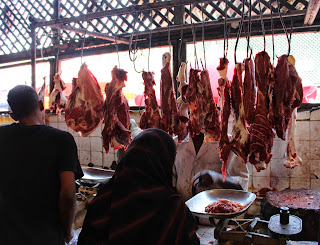 The last market we went to was the textile market.  Atwar took me to a shop where he said I could find good cloth.  I forget the name of the cloth that people wrap around their legs as skirts of that the Masaii people use for clothing.  It's either thin cotton or wool.  We could use it as a shawls, skirt, tablecloth or wall hanging.  I skipped the traditional African stripes and asked to see any of the animal ones.  He came back with about ten and I chose a few as gifts.

We made our way to Old Town then, to get a view of the giant elephant tusks on Moi Avenue - the main street in Mombassa, named after the second prime minister.  The tusks aren't real tusks, but still look impressive. 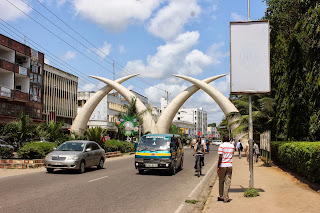 We stopped at a quality souvenier shop so that I could buy some wooden animal carvings as well as one in malachite.  A gorgeous green marbled stone.  I had seen a couple of them on my travels and thought they were quite beautiful and would go well with my elephant figurine collection.  One place we stopped at while on safari, the guy tried to sell it to me for $200.  I declined - told him I only wanted to pay about $20.  He wouldn't take less than $100 for it.  So I was prepared to pay around $50 for one in Mombassa - we settled for $55.

We walked to Fort Jesus, built by the Portuguese in 1593.  "Very big on outside, very small on inside," Atwar said.  "Free to see outside, pay to see inside."  So we saw one wall and went back to the hotel.  Worked for me.

Back at the Castle Hotel, I had a chance to rest with a cold bottled water before meeting with Dennis again and getting back into the hot vehicle.

Dennis made sure we left the city centre before 2pm when the muslims finished their prayers.  He said one of the terrorists was killed in Mombassa yesterday (not true, we found out the next day) and he expected protests in the streets after the prayers were finished.  He said the muslims protest about many things.

I had wanted to visit a cultural village where I could see the traditional huts of various tribes.  Dennis told me not to go to the one that was closest to my hotel (it had just the huts) but to go to Bombolulu
Workshops and Cultural Centre instead.  It was along the way, but in addition to the huts, they also had various workshops which employed people with disabilities.

I saw various huts.  This one is one of three huts that served as the tribal equivalent of a hospital.  One small hut held the medicines (herbs, etc), this one was the treatment centre, and the third was a consultation hut. 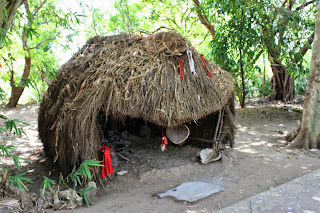 The last dwelling I saw was for the Swahilis.  They had fewer and larger, cement houses as opposed to small but many twig or sod huts of the other tribes.  Here's the entrance... 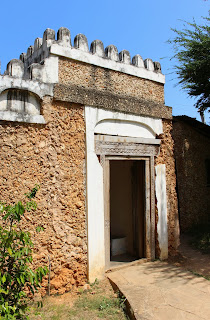 But what I found more interesting were the workshops.  They had workshops for horticulture, leather work, jewelry, textiles, woodworks, and my favourite - for mobility aids.  At the mobility aids workshop they build wheelchairs and hand cycles.  They cost $195 each.  Several of the workers had their own cycles, and the back seat cushion would say who donated them.  Apparently Oxfam purchases many of the wheelchairs and hand cycles to give to people with mobility issues in other third world and developing world countries.  It is a good business for the centre. 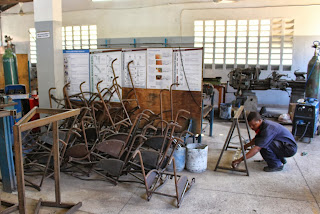 The tour was finished by watching four native dances (I was the sole audience) and a visit to the gift shop. 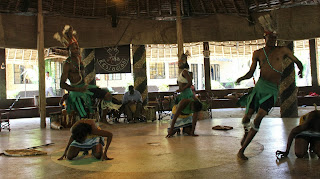 Dennis took me back to my hotel where I relaxed for the evening.

Posted by Linda McClung at 1:34 PM