I had a fun excursion Saturday afternoon at Haller Park.  It used to be a quarry but in 1971 they began the process to turn it into a private reserve – demonstrating environmental management.  Upon arriving at the gates, I saw four Rothchild giraffes grazing on the trees.  There was also a giant tortoise mowing the grass.  He’s just a teenager – only about 100 years old. 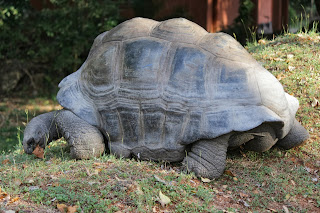 As with most other attractions, once I paid my admission there were guides to provide information.  My guide, Angus, took us around to the reptile gardens, the fishery, and then to the various feedings.  For 50 schillings (about 70 cents) I got a bag of food pellets to feed the giraffes.  You can see the monkeys stealing the pellets that dropped. 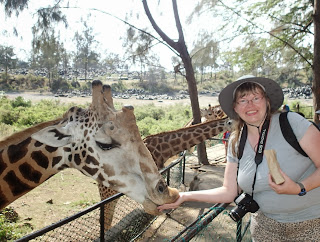 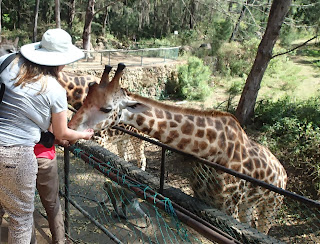 Giraffes have very long, narrow, tough-skinned tongues.  They are designed so that the giraffes can reach as high as possible and grab the leaves without getting too many thorns in their tongues.  The acacia trees have thorns that are about 3 inches long.  Very sharp. 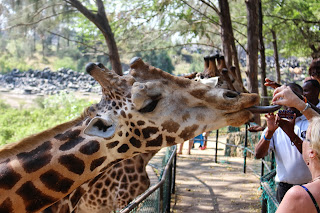 
Giraffes avoid certain ‘whistling’ trees.  The trees whistle because a colony of tiny ants have built a nest in the tree and get their food from chewing into the bark – which makes it whistle.  There is a somewhat symbiotic relationship in that the tree provides food for the ants and the ants provide protection against giraffes eating the leaves.  The ants do this in two ways – if a giraffe starts eating the leaves, the ants come out in the hundreds to bite him.  But they also let off toxic fumes, which turn the giraffes off their dinner. Apparently, you can smell it from the ground.  Ultimately though, the tree dies from the ants’ endless feeding on it. 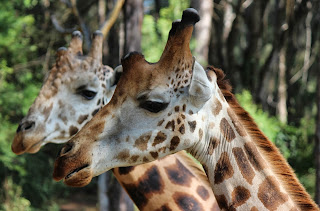 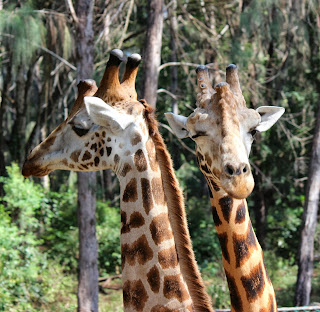 A giraffe’s heart weighs approximately 24 pounds and beats around 150 beats per minute.  It must pump blood at twice the human blood pressure to ensure it reaches all the way to the head.  They also have elastic skin around the legs which prevents blood from pooling in them. 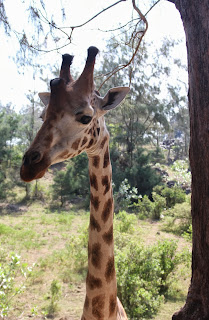 When a male lion wants to kill a giraffe he lies in wait at the watering hole.  When the giraffe is drinking his front legs are spread wide and his neck is downwards.  The male lion will pounce on its neck, and if my safari guide is to be believed, the blood pressure can make the head explode.


The legs of a giraffe are about 6.6 feet tall.  They can gallop at 60 km/hour for short periods of time. 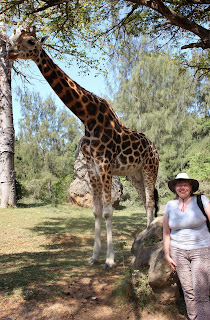 Having fed the giraffes, we moved on to the hippo feeding.  No group participation here, just watching as two hippos emerge from the swamp to eat the food pellets laid down by an employee.  And the monkeys were around to steal the food here, as well.  Wow, are hippos huge beasts.  Despite their short feet, they can run up to 32 km/hr. They are responsible for the most deaths by a wild animal in Kenya.  They are grazers – they don’t eat you – they just trample all over you if you’re in the way or if you spook them. 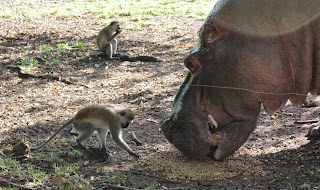 Hippos, by the way, spend a lot of their day in the water because they don’t have sweat glands.  They use the water or mud to keep them cool.  At night, they come out of the water to graze. 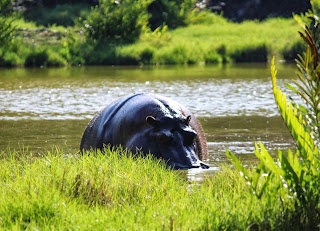 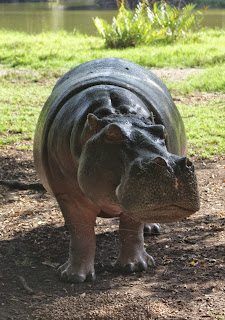 The last stop was to watch a crocodile feeding. They bring a few small pieces of meat for the crocs to eat, but the main feeding is once a month.  Crocodiles can go up to 5 years without eating.  They can live for 80-100 years. 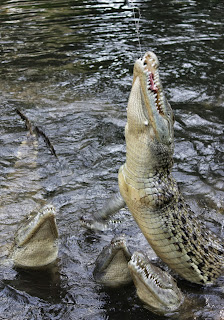 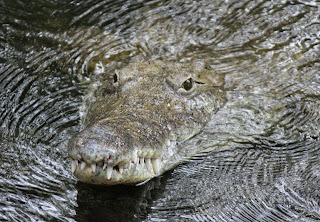 While waiting for feeding time, I was able to photograph a weaver by his nest.  I had seen these nests dangling from trees like Christmas ornaments throughout my trip, but didn’t get a close up photo of the bird itself.  The male bird makes the nest and the female bird will inspect all the nests and decide which one it likes best.  Whoever is the best nest builder, he becomes her partner.  The pair will come back year after year, do some home renovations and then lay eggs and raise their young. 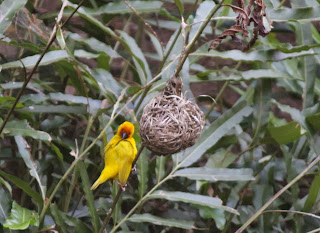 I was also able to get a photo of an African Baobab tree, otherwise known as the upside-down tree (especially if there are no leaves on it).  It has a massive trunk – this one is about 30 years old. 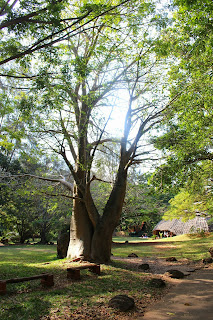 Two other creatures I was able to photograph was this red dragon fly and the agamas lizard.  He's a vivid red and blue. 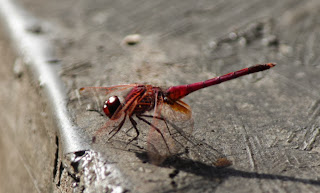 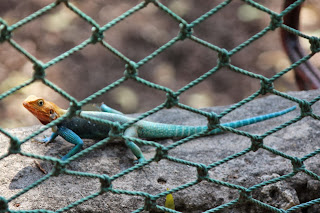 And here are a few more cute animal pictures.  The first is a baby waterbuck, the second is a vervet monkey family, and with the third, I really like this little one's pose.   He looks so innocent, but he's a rascal! 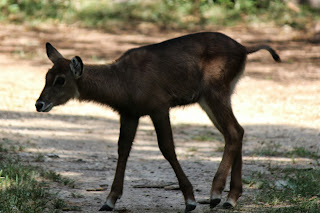 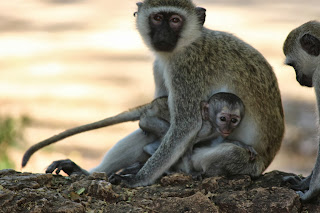 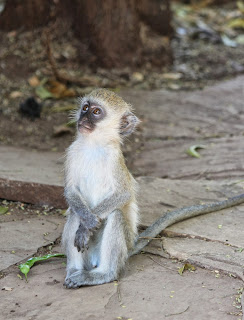 This was a great little excursion to end my stay in Kenya.
Posted by Linda McClung at 2:06 PM

Thanks for the opportunity to enjoy your adventure with you. Beautiful photos and interesting insights and facts.

What a fabulous trip, Linda! I've really enjoyed seeing all your amazing photos and am very jealous of all the wildlife you've been able to see for real, creatures which normally only come on TV with a commentary by David Attenborough! Wonderful.