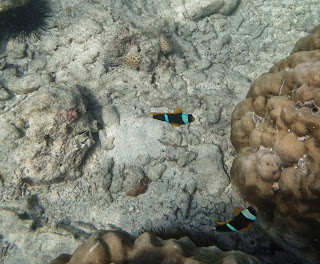 I went snorkeling this afternoon, and yes, I found Nemo and a few of his friends. 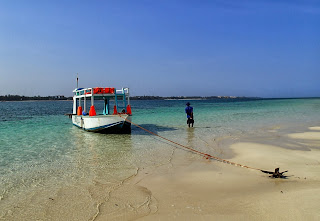 Here’s the glass-bottomed boat I went on.  Let me tell you how that happened…


Snorkelling was the one thing I wanted to do while here in Bamburi/Mombassa.  I arrived late yesterday afternoon and checked with the front desk about how one can arrange a snorkeling excursion.  They told me they could arrange a full day package for $140 which included snorkeling, all the crab I wanted to eat, drinks and a club at the end of the day.  When I explained I only wanted a trip for a couple of hours and didn’t eat crab or go clubbing he said there was no other package he could offer.  He then said I could have it for $110.  It still wasn’t something I wanted to do.
I decided to go for a walk on the beach and after passing about a dozen hawkers trying to sell their wares, I went to one of the resorts along the beach for refuge and something to eat.  I chatted to the waiter and told him that I wanted to go snorkeling, but my hotel could only arrange full day excursions.  He said he would call his friend who does excursions and his friend would talk to me about where he could take me and then we could arrange a price.

Turns out that each hotel deals with certain outfits and my hotel just dealt with the outfit that did full day jaunts.  A couple minutes later a guy walks up the steps and the waiter introduces him as his friend.  Kassim showed me his boat users licence with his photo ID, pointed out his glass-bottomed boat and then told me where we would go in the Wildlife Service’s Marine Park.  I had in mind a price I wanted to pay and with very little bartering we agreed on 3200 shillings (about $40).  Seemed a fair price to me.  I paid a deposit and we agreed to meet the next day at 2pm.


When I arrived for my tour today, Kassim and I settled up and he took me to the boat.  We waited a bit for another tourist who never showed up and then my trip began.  It was just me and two Kenyans who were his employees.
One of the two stayed on the boat and the second came into the water with me for a while to show me the corals and point out different types of fish.  The one on the boat would throw food into the water so there would be lots of fish near the boat. 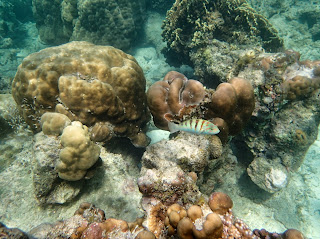 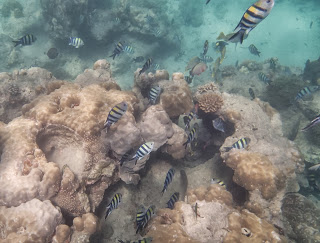 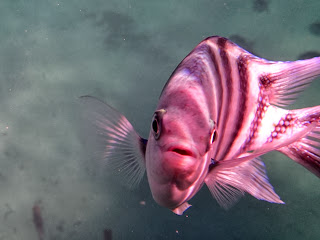 The water was comfortably warm – like bathwater when it has cooled off and it’s time to think about getting out.  I was telling the guys that where I live one wears a wet suit like a diver because the water is so cold.  This also led to comparing various sea life.  They have red starfish and blue starfish.  Here’s a red one. 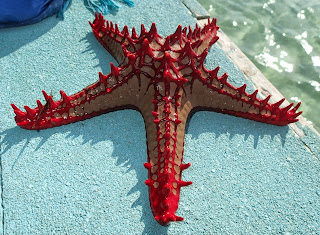 I think we have a much larger selection of starfish back home.  But we have similar types of anemones and sea urchins.  And their fish are more colourful.  One that really intrigued me was this one – with it’s yellow fin and pink/blue side fins.  Its body shimmered like a rainbow.  Anyone know what it is? 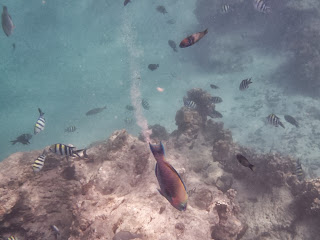 I think I probably saw a dozen different types of fish including the trumpet fish which are long and skinny like the body of a trumpet, and some electric blue ones that were about 3 inches long.  There were a few schools of fish that hung around beneath the boat. 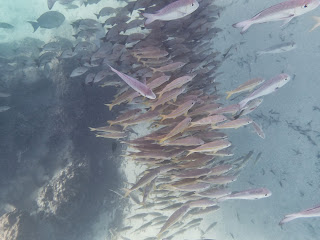 When I was taking pictures of the fish near the surface and they fed the fish, the guy must have put some right in front of me because all of a sudden I could feel the fish jostling around me to get to the food.  It was a bit startling, but very cool to see. 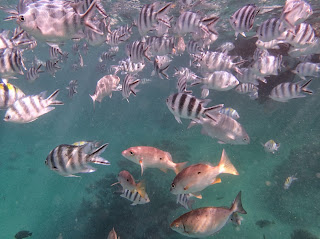 In case you were wondering, the sharks stay on the other side of the reef – the deep side.  I was in the area between the reef and the shore.  And such a nice shore it is. 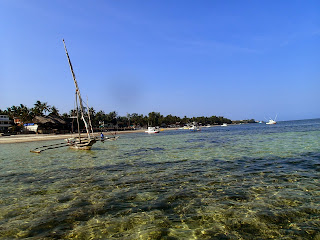 I am really impressed with my Olympus Tough camera which is what I used to take my pictures under water.  It took clear pictures, the zoom worked well and the best part – it didn’t spring a leak.  Which means I can use it again! 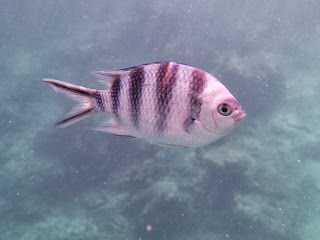 So enjoyed seeing your pictures and reading your commentary. The Underwater camera certainly gave you great photos. Enjoy the rest of your trip