I went to one of my favourite cities today.  Turns out the city of Bath, England was granted World Heritage status by UNESCO in 1987 which identifies it as “a masterpiece of human creative genius whose protection must be the concern of all.“


Much of the heart of Bath is built from Bath limestone during the Georgian period – which is a very elegant stone, especially in the sunlight.  Didn’t get any of those golden hues today though as the fairly constant rain gave me a very good reason to linger indoors – be it at the Bath Abbey, the Roman Baths or the pub.


Here’s an outdoor photo of the plaza in front of the abbey.  You can see the limestone buildings as well as the crowds.  The plaza is the start of most walking tours and groups visiting the baths to the left of the abbey. 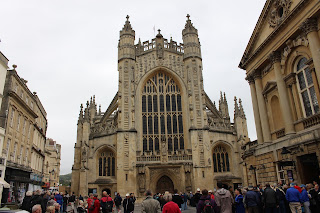 The abbey has amazing architecture – I don’t know the correct terminology, but I can certainly appreciate its beauty.  Here’s a picture facing the front.  The stained glass is actually over 50 different depictions from the bible. 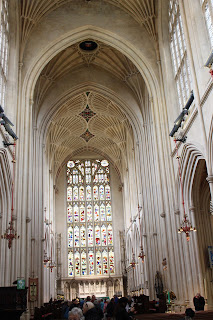 Here’s a close up of the ceiling. 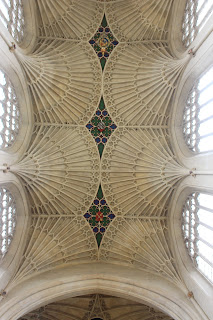 On all the walls and alcoves were stained glass windows.  Here’s one of King Arthur and St. George.  Didn’t think the biblical figures and Arthurian legends could co-exist in a place of worship. 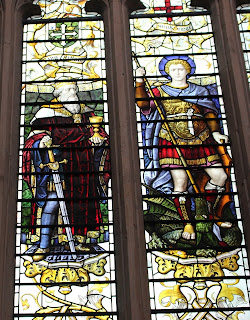 I learned to play the organ as a child so I am always drawn to pipe organs in churches.  This one is splendid and has angel musicians playing below it. 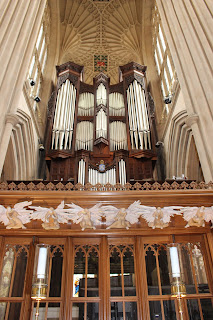 I was amused to see one of the angels playing the bagpipes.  Who knew, eh? 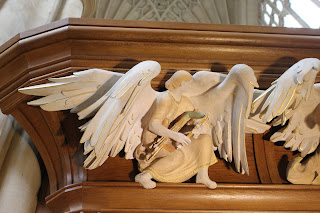 Meandering slowly around the building there were a plethora of wall and floor tablets to read.  Most were from the 1700s and 1800s.  One of my favourites was this one for Anne who died on August 19, 1733:


Sacred to the dear memory of Anne, only daughter of George Finch, Esq. of Valentines in Essex. An excellent person, well natured, discreet and virtuous, most affectionately beloved by her relations & most justly esteemed by all who knew her.


It pleased God to visit her with a tedious and severe illness, which, (tho in the flower of her age & blessed with a plentiful fortune) she bore with great evenness and constancy.


She prepared herself by frequent and fervent devotion for her dissolution which she waited for with such pious resignation as manifested her heart to be affected with the power of religion and the well grounded hopes of a beloved eternity.


Her being the more desirable in that the first real occasion of grief she gave her sorrowful mother was her death. 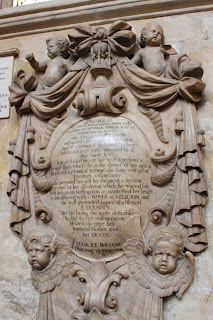 After reading my fill, I joined the queue of people waiting to see the Roman Baths.  I’ve never actually visited the Roman Baths on my previous visit so decided I was overdue.  Here’s the entrance with its elegant limestone and signs. 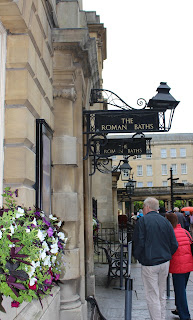 I didn’t know what to expect as all I ever saw on postcards and advertising was the main bath. Was that all there was?  Apparently not.  The area was built by the Romans and named it Aquae Sulis.  In addition to many baths of varying temperatures there was also a temple dedicated to Sulis Minerva. Wasn’t Minerva with the head of snakes?  These baths are “the finest Roman spa north of the Alps, still flowing with natural hot water, the only hot springs in the UK.”  There are only two pools that are full now most everything else is in ruins and the museum shows artifacts and talks about how the baths worked and the social culture around them. 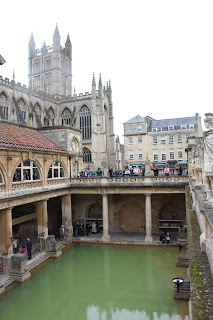 Because it was a cold and rainy day one could see the steam coming off the 35 degree Celcius water.  The water is tinged green as the pool no longer has a roof like it did in Roman times so the sunlight has caused algae to grow. 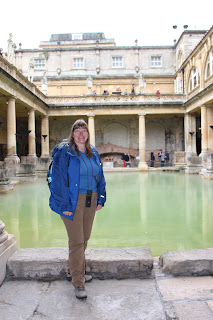 Above this largest pool was a terrace and Roman historical figures will built on top in the last couple of centuries.  The terrace was a great place for me to get a different viewpoint of the abbey and also of an archway between the adjacent buildings. 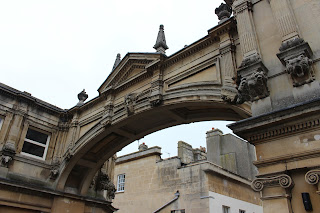 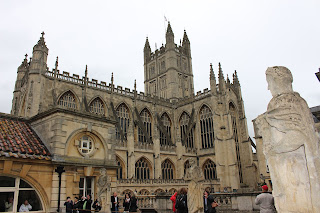 On the lower level, I was better able to get the steam in my photos and even managed to get a photo without any tourists in it. 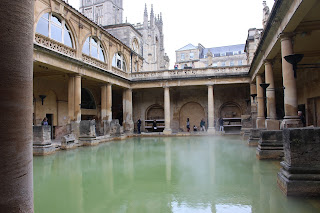 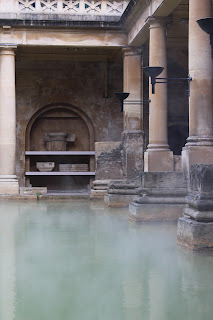 Here’s a smaller, hotter pool which I took through a gap in the walls (Cheryl, I can hear your muttering about holes from here!). 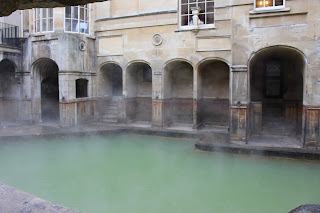 Before heading to the train station I stopped at a pub for a pint of Thatcher’s cider and a lunch of fish and chips (and peas – not mushy ones thankfully).


Have now arrived in Southall, London.  As I’m staying in an Indian neighbourhood I think I’ll grab a curry from the restaurant on the ground floor of my small, family-run hotel.  Need to get to bed early tonight as I’ve got a 9 hour flight tomorrow during the day and another time change – three hours I think.
Posted by Linda McClung at 2:09 PM

Minerva is the Roman version of Athena. The architecture of the Abbey is breathtaking.

Cheryl, what was she the god of?

Silos Minerva was a combining of the original Celtic goddess of Bath, Sulis, with Minerva.

Sulis was goddess of the sun, spring water and hot springs.

Minerva was the Roman goddess of wisdom, reason, purity and protection of home and state.