It’s been a long day – with lots of goods and bads in it.


Bad:  Woke up with a sore throat.
Good:  Hasn’t gotten worse and don’t have any other real flu/cold symptoms.   The lodge I am at tonight have Strepsils to soothe my throat.


Bad:  Saw a farmer’s cow run on to the highway in front of us and it was hit by a truck.
Good:  It wasn’t us who hit it.  As an aside, the government is trying to discourage the cattle herders from letting the animals roam near the highways.  If an animals runs into a vehicle, the driver of the vehicle is legally required to stop and get the herder’s information.  He is then required to take him to court to get the vehicle repair costs back from the herder.


Bad:  Took about five hours to drive to our lodge near the Masai Mara Game Reserve.
Good:  Only the last 2 hours were the worst washboard I had ever experienced.  They’ve had lots of rain recently so parts were washed out, ruts could be over 1 foot deep.


Bad:  It started raining as we reached the game reserve, which meant we had to keep the roof on most of the time. Several of the windows wouldn’t open properly so the vehicle got foggy inside.  It made it more difficult to get pictures.
Good:  More rain means less dust which makes it easier for seeing things and also maintaining the camera. 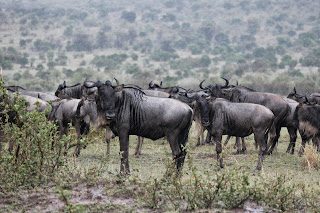 Bad:  The rain made the animals want to stay dry and under cover so we didn’t see as many as on a sunny day.  Wildebeests, zebras and a few other animals just stand still with their butts facing the direction of the rain and wait it out.  These wildebeests were looking pretty wet.


Good:  We saw two of the ‘big five’ – the cape buffalo and lions.  Another vehicle had spotted the first two male lions, but I was the first one in the convoy to spot the lioness out in the distance.  Our driver went off the main path to get closer so we had the best views before the other vehicles followed.  There were probably about 20 vans - it was quite the traffic jam. 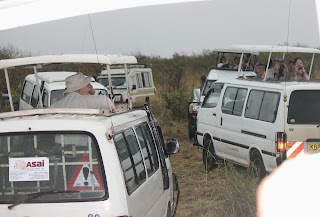 Apparently the only time safari vehicles are allowed to go off-roading is if a lion is sighted.  After all, they want to give the tourists what they came for.  The lion is usually highest on most people’s list.  If a vehicle is caught off-roading in all other circumstances, they are fined 10,000 Kenyan Shillings – about $130 US.

I was very glad we were able to get close to the lions.  Here's one of the males... 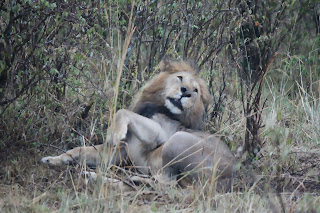 And here's the lioness. 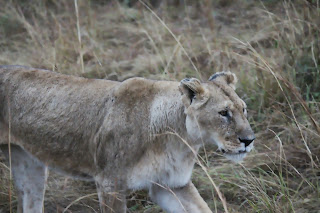 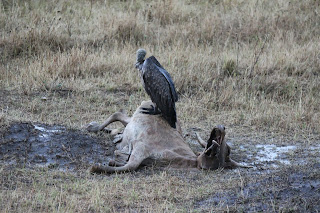 Bad:  Got a little wet on the ride, but enjoyed the lightening in the distance.
Good:  Were able to come back to our comfortable lodge for a fabulous dinner.  The buffet meals are amazing – so much to eat.  Had some amazingly good grilled beef today – the marinade was awesome.


Time to get to sleep.  I drew the mosquito netting around my bed before I went for the 4-6:30pm game drive in case we didn’t get back before sunset.  Got one mosquito bite yesterday in Nairobi – none today.  One of my fellow passengers was saying that Kenya is trying to persuade the CDC to change their ruling and list Kenya as a malaria free zone.  Supposedly none of the mosquitos in the country carry malaria.  Good to know.  Still taking the anti-malarial tablets, though!
Posted by Linda McClung at 9:52 AM