The importance of daffodils

I thought I'd take a few minutes out of the daily grind to write about something beautiful. 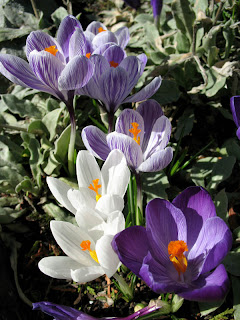 Spring has started to arrive here in Victoria and I couldn't resist going out and taking some pictures of the crocuses and daffodils outside of our apartment. 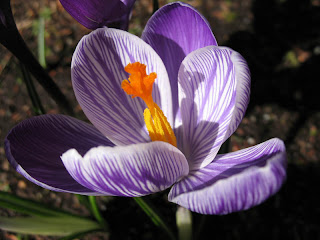 While crocuses like this one are the first sign that spring has arrived for most people, to me it is the simple daffodil which shouts sunshine, joy and hope. Not only are daffodils one of the first flowers to bloom in spring here in Victoria, but they have been present in so many 'firsts' of my life.

My first encounter with daffodils was on my first job in Winnipeg. Winnpeg is a few miles off of the longitudinal centre of Canada. Basically this means you're a couple thousand miles from oceans - the Pacific and the Atlantic. Because it is in the southern portion of the province, it also happens to be about that far to the Arctic Ocean, too. That translates to extreme temperatures - intensely hot in the summer and bitterly cold in the winter. And winter lasts longer than spring and summer combined.

The social committee at my work was promoting a fundraiser for Cancer Research, an organization that uses the daffodil as their symbol. I donated some money to purchase daffodils and weeks later they arrived. Here it was, the middle of winter, snow had been on the ground for months, the temperatures were in the deep freeze and I had these bright yellow flowers on my desk. They gave me such joy and hope for the future. It makes sense to me why daffodils are the symbol for that particular charity. 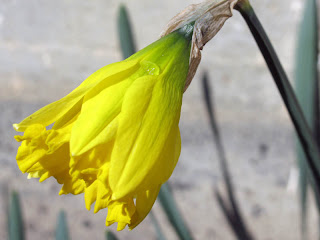 My second encounter with daffodils was during my first visit to Victoria to see Beth and check out whether I wanted to live here. I believe it was late March or early April and daffodils were everywhere. On the journey from the ferry terminal in Sidney to Victoria, I saw fields cultivated with daffodils. This was a foreign concept to me, prairie girl that I am. Fields were for hay, for corn, wheat and other grains. But flowers? Amazing.

In Beacon Hill park, a few blocks away from where I was staying and where we currently live, the hillside was covered in daffodils. Most yards had daffodils blooming too. All these beautiful sunny flowers. It was a huge selling point for me to move to Victoria. Beth was number one, but I think the presence of daffodils and the lack of mosquitos were tied for second place! 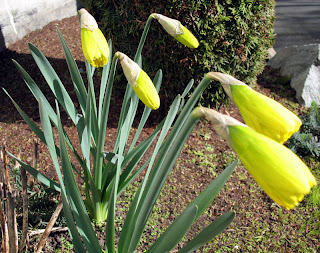 The first time my mom came to visit me in Victoria was also in spring and I took her to see the hillside of daffodils and from that visit forward my mom thinks of me whenever she sees a daffodil. It's a special connection, I think.

That connection was also reinforced when I announced that Beth and I were moving to Wales so that Beth could pursue her PhD. For those who don't know, daffodils are the nation's flower. And on St. David's Day on March 1st, the girls traditionally wear daffodils. (The guys must have drawn the short straw because they wear leeks.) Daffodils were plentiful in Cardiff where I lived. They reminded me of Victoria and my mom out in the prairies. And there was that cheerfulness about them that always brought a smile to my face.

When we decided to move back to Canada there was one thing which I wanted to take back with me. I had always lusted over the carved Welsh Lovespoons. A few days before we left, Beth took me to one of the Welsh Lovespoon shops and I picked out the perfect spoon. 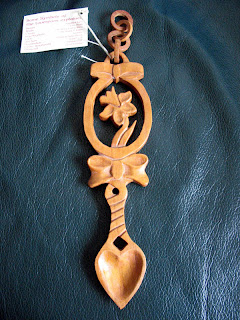 Here in Victoria, it is daffodil season again. I feel so fortunate that I can buy two bunches of daffodils for the price of a cup of coffee and bring sunshine into our apartment. Daffodils remind me that there has been difficult times before, but despite any adversity (weather, moving across continents, illness or finances) there is always something to look forward to.
Posted by Linda McClung at 6:31 PM

These are one of my favorite flowers and brought back memories of my own. In elementary school, I was given some money for Valentine's Day from my grandmother and bought a small pot of them.

When I was in a bodycast and reading the Secret Garden, they signified an escape, being able to self create.

My grandmother grew them and took us to a place they are grown en masse--which I still visit regularly.

They were a bright spot on my alma mater's campus during bleak and gray winter.

I saw them everywhere in England with our baby daughter, hillsides covered. And on people's lapels on March 1.

I've grown them myself.

Thanks for the uplifting post! There is indeed always something to look forward to. Keep going, and remember that we are behind you!

Nothing like a spray of sunshine on your table. Thanks for sharing these lovely stories.

I can see why you love daffodils :o)

My husband and his family are Welsh, I am my family are English. When we got married my husband's parents commissioned a loving spoon for us. It has a rose (for England and me) and a daffodil (for Wales and him). I shall have to send you a photograph :o)

Your spoon is beautiful.

For me I get a sudden rush and gasp when I see my first snowdrops. It takes me back to my childhood home arriving home from school and with Spring spying a clump of snowdrops in the front garden by the front door. It always signalled that brighter days were coming.

I too love daffodils (they're doing well in my garden right now) and so pleased you like the national flower of Wales!
I do like that Welsh lovespoon you have... I have quite a collection, as Geoff has given me one every year on our anniversary, for the last few years. I have them displayed on the wall. I always give lovespoons as gifts to couples, and last year gave one to my first friends to have a "civil partnership" - what I prefer t call a gay wedding. Mind you, I gave one as a 20th anniversary present to my brother and his wife... and 3 months later they split up, so now I'm a bit more wary of who I buy them for.
Greetings from Wales...
... and all the best for International Womens Day too.

I thought the love spoons were Irish.

Irish, Welsh, Scottish... all the same stock, when you get down to it.

Those are beautiful photos. I hope that the two, three of you get to enjoy a lot of Canada spring.

Yes, I love daffodils too - they are so cheerful, and they are even more lovely on a windy day, or under grey skies. My absolute favourite spring flower has to be the pheasant's eye narcissus, which is also a kind of daffodil, just a white and orange one instead of yellow.

Thanks for the reminder to look at and appreciate the small stuff - and hoping spring is actually here for a while, not just a fleeting visit

A very beautiful entry! Thank you for letting us meet this part of you.

No, love spoons are definitely and uniquely Welsh! The Irish have the best music and dancing, Even our harps we share with the Irish... and they took our rugby trophy back off us last Friday too! The Scots have haggis, the kilt and the bagpipes, leaving about the only thing we Welsh have that is all our own is (are?) love spoons.

How is it said?

The Irish are Scots who got smart and left?

The Scots are Irish who got bored and swam back?

I don't know any about the Welsh or the Picts. The rest of Britain was Germanic or Norse or something, so they don't count.